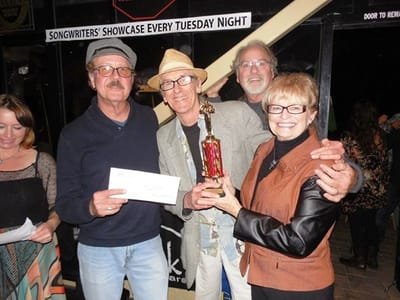 " I listen to the following songs on repeat from your California album (guessing on titles because the CD is in my car, ready to be played):  California, Bubble, Caribbean Cruise, Plastic Man. California brings me to tears, Caribbean Cruise makes me grin from ear to ear, Bubble feels like truth wrapped in truth, and Plastic Man is a delightful way to show that our assumptions can be completely backwards in a world filled with moral assumptions"--Lira Filippini, co-chair, Our downtown Our future, Santa Cruz 12/4/22

"Brutsché examines modern existential questions, in sixteen tracks with enticing melodies, clear lyrics with a mixture of genres, from folk to rhythm and blues, country to calypso--have listened to it over and over"--Sarah Ringler, editor, Serf City Times 2/4/22

"Interesting juxtapositions of historical icons...underneath much of Brutsché's work is a critique of a consumerist society and how we spend our days in its thrall"--Wallace Baine, Santa Cruz Sentinel 5/6/10

PAINTINGS
Russell has been painting since early childhood. He attended San Jose State University, graduating with scholarship honors in fine art in1968, and has since been in numerous one-person and group shows throughout California, Colorado, Arizona and Japan. In 2001 he had a one-person exhibit at the Museum of Northeast Nevada, as featured in VIA magazine. In 2008 his illustrations were used as book covers for novels "Iowa Terror" and "Guests of the Nation" by author Mike Palecek, and in 2017 for "Love in a Time of Climate Change" by Sharon Delgado. His art has been featured on CDs by Mike McKinley, Kacey Jones, Perry Devine and Laurie Jennings/Dana Keller among others. Please visit gallery on this site.

"Beyond just capturing natural beauty on canvas, his majestic scenes include subtle juxtapositions, suffused by his passion for shedding light on socio-cultural ironies and injustices in the world"--Santa Cruz Good Times 10/4/12

I BUILT MY SITE FOR FREE USING