Original tunes that will tickle your brain and funny bone Wed. Aug. 28 at 7:30pm $10 adv./$10 door seated <21 w/parent Join us for the launch of “Folking Funny”. Janet Croteau, the creator of “Women Who Folking Rock” is joined by witty, clever songsters: Russell Brutsche, Michael Gaither, Hannah Cooper, and Midyne Spear. 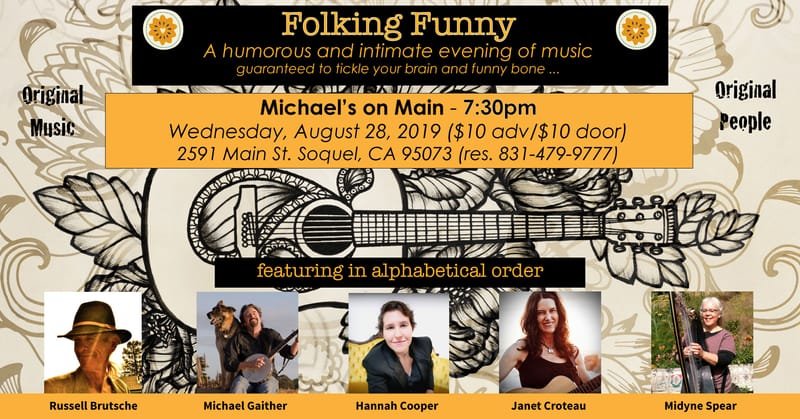 Russell Brutsche writes songs of personal and social transformation. He won first place in MARS 2015 Songwriting Competition. Originally inspired by playing warm-up for Van Morrison, Brutsché toured Canada in the 80's with Small Town Band. In 2014 Nashville performer/producer Kacey Jones covered "Climbed A Hill" from his CD Restless Heart, and Mike Greenleaf released his version of Brutsché's "Westbound" in summer 2018. Brutsché's recent album "Bucket of Gold" is available in CD and also download card, at performances and through CD Baby.

Michael Gaither crafts songs with humorous takes on everyday life that cover small-town nostalgia as well as modern technology. A Santa Cruz County native, his music also has a healthy preoccupation with locales from the past (“Starlite Drive-In Saturday Night”) and present (“Highway 17″).  Michael turned to songwriting after a background in journalism and a narrow brush with standup comedy. (He sold jokes to Jay Leno. A long time ago. Back when Jay Leno was still funny.) Most recently, Michael ran screaming (semi-quietly) from a corporate job and is now enjoying his time playing a LOT more music and filling the rest of his time as a DJ on KPIG radio.

Hannah Cooper is a multi-award winning singer-songwriter who has performed as a solo artist most of her life. Hannah learned quickly how to capture an audience using her rich soulfully-filled Mezzo voice accompanied by a little eyebrow-raising guitar work you don’t see many solo female artists do. She's An exquisite performer with a veracious voracious path, who drapes an elegant voice around her guitar.

Janet Croteau is a songwriter, spoken word artist and psychotherapist who infuses her music with a healthy dose of “depth comedy.” (TM.) The inspiration for Janet’s music comes from the humor, beauty, and madness of the world. She believes that if you water down who you really are, the real people will never find you. Janet, the producer of Women Who Folking Rock, Folking Funny and Tell Me More (an autobiographical story telling show) recently released her first album, "Wild Heart.”

Midyne Spear’s original melodic grooves are infused with blues, pop, and jazz influences that sprout seamlessly from her folk roots.  She delivers her songs with a crystal-clear strength that invites comparisons to Gillian Welch, Mary Chapin Carpenter, and Joni Mitchell. As a third-generation musician, Midyne spent her adolescence in the studio recording children’s songs. As an adult, she recorded with Electric Angel—the world’s first electric harp trio, is featured on compilations and appeared as a guest artist on other recordings. In 2013, Midyne released Inside the Seed which features 13 of her original songs.

I BUILT MY SITE FOR FREE USING